and here is what I did: 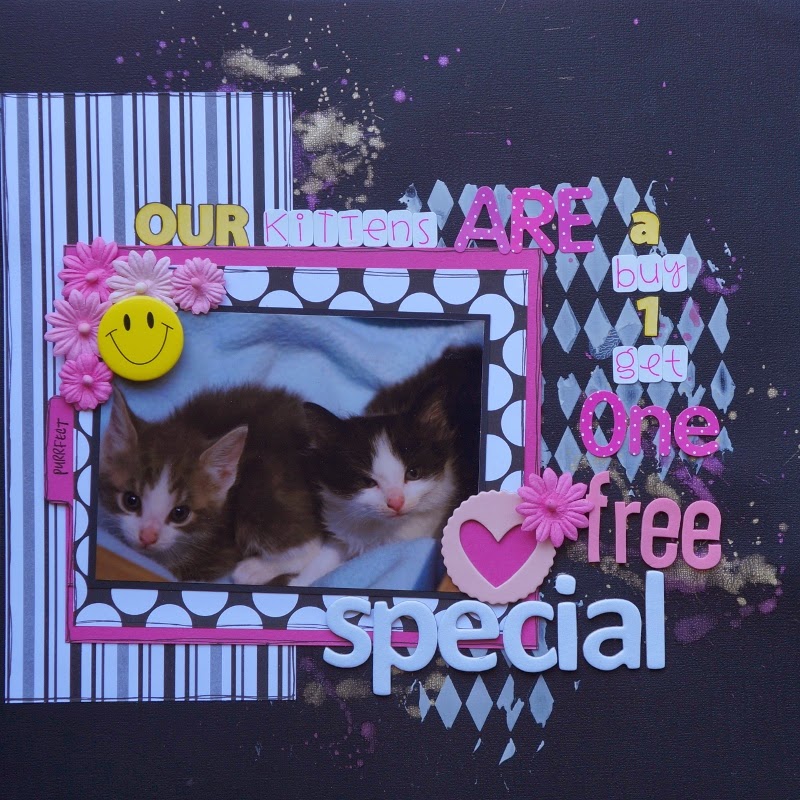 Here is how I solved case 107:
Scheme - the colours are all there
Evidence – flowers, badge, heart, splashes, wet medium, long title, stripes and harlequin pattern.


Testimony – IW:  know, cool and awesome “I found a listing on Trademe for the cutest kitten.  He was a little boy, with cool grey tabby markings on his head and back.  I arranged with the owners to go and have a look and as they were leaving the country the next day.   I took my money with me to buy him (if he was as cute in real life as he was in the photo’s).  When I got there, the lady picked him up and bought him over to me.  He was so tiny that he fitted in my hand.  He was a little bit timid, and I thought he was AWESOME!  So I handed over the money and went to go.  The lady and her daughter started shouting at each other in their mother tongue and the daughter said, “My mother wants to know if you want the last kitten as well?”  I said, “no thank you, I only bought enough for one kitten” and the mother said, “no money, no money – you take”.  The daughter was very upset and she whispered to me, “please take her, we leave the country tomorrow and we will have to ‘get rid’ of her, if you don’t take her”.  I called Jack and he only had one word…  NO.  So I packed up the little guy in a box and got in the car and started to drive home.  Jack called me before I got to the end of the street and said, “Oh… All right…”  I ended the call and raced back to the house and knocked on the door and took the little girl.  When I got home, Jack and I both agreed that they were better together and I know that it will cost a little bit more, but the look on the girls face when they saw that we had two new kittens was worth it.  When I told them the story of how we ended up with two kittens, they were relieved because they both thought that they had to choose one…  I explained to them that while I chose the little boy, the girl was special as she was our Buy one get one free kitten.
Posted by Chrissy at 19:59